squeeze all the juice out of your potential...
Enter your email below to access the full Work On Your Game MasterClass Archive NOW...
Access the archive now We don't sell email or spam. Spam is nasty anyway..

Media kit for Dre Baldwin's daily MasterClass / podcast: Work On Your Game
Work On Your Game Podcast sponsorship: Get exposed to 150,000 listeners every month!
(everything you need to know is on this page)
“Dre Is The BEST At Being REAL, Direct And Strategic As A Coach.”
1) Discipline: Show up day after day to do the work.
2) Confidence: Put yourself out there -- boldly and authentically.
3) Mental Toughness: Keep Going, even when the success you've expected hasn't yet happened.
4) Personal Initiative: Be a go-getter Who makes things happen instead of waiting for things to happen. 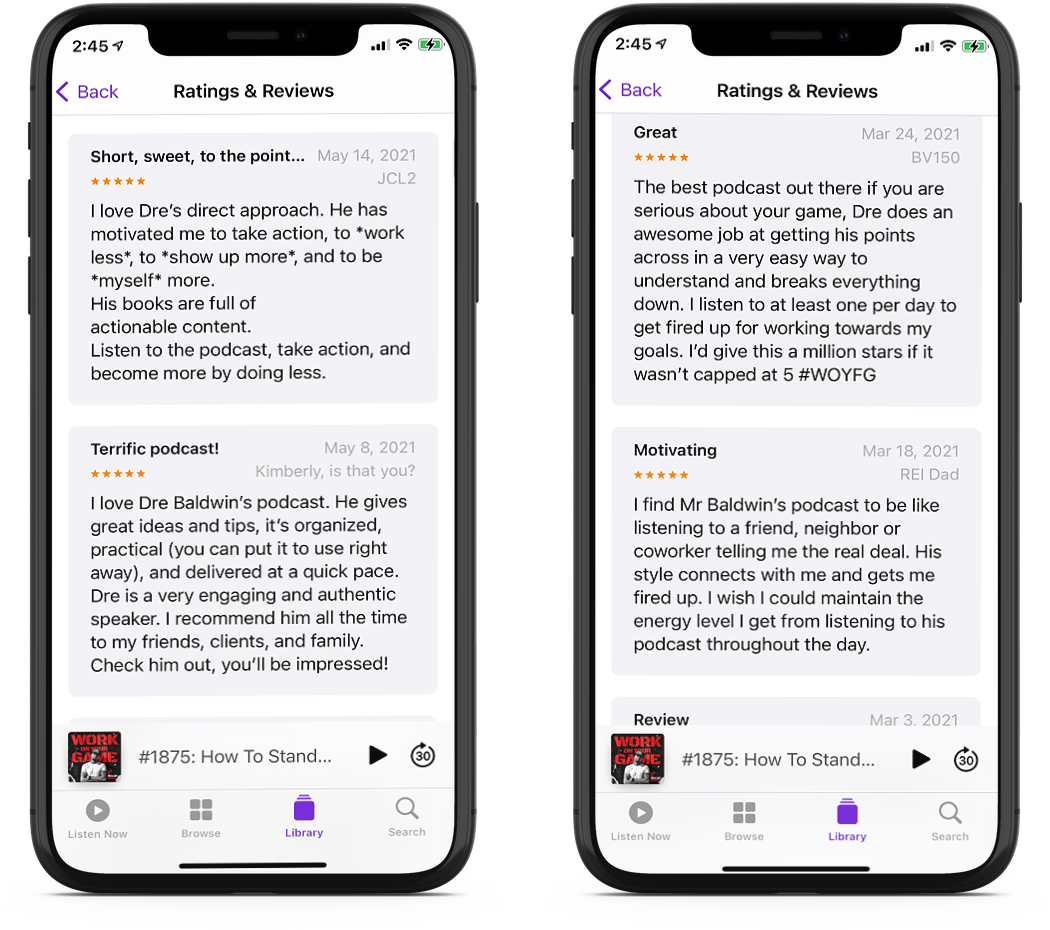 Read This Before Going ANY further:
From Dre Baldwin
Miami, FL
Of all the content formats I engage in -- blogging, video, audio -- this show has been my favorite.
Not only can I express my opinions clearly and in detail, I have an intelligent, growth-focused audience who is looking for what I'm sharing. THAT'S the best part.
sponsors have ZERO input on the content or topics of Work On Your Game. this is non-negotiable.

your host: Dre "DreAllDay" Baldwin
As CEO and Founder of Work On Your Game Inc., Dre Baldwin has given 4 TEDxTalks on Discipline, Confidence, Mental Toughness & Personal Initiative and has authored 33 books. He has appeared in national campaigns with Nike, Finish Line, Wendy's, Gatorade, Buick, Wilson Sports, STASH Investments and DIME magazine.
Dre has published over 8,000 videos to 140,000+ subscribers, his content being viewed over 73 million times.
Dre's daily Work On Your Game Podcast has over 2,300 episodes and more than 5 million downloads.
In just 5 years, Dre went from the end of his high school team's bench to a 9-year professional basketball career. He played in 8 countries including Lithuania, Germany, Montenegro, Slovakia and Germany.
Dre invented his Work On Your Game framework as a "roadmap in reverse" to help professionals with mindset, strategy, accountability and execution.
A Philadelphia native, Dre lives in Miami. 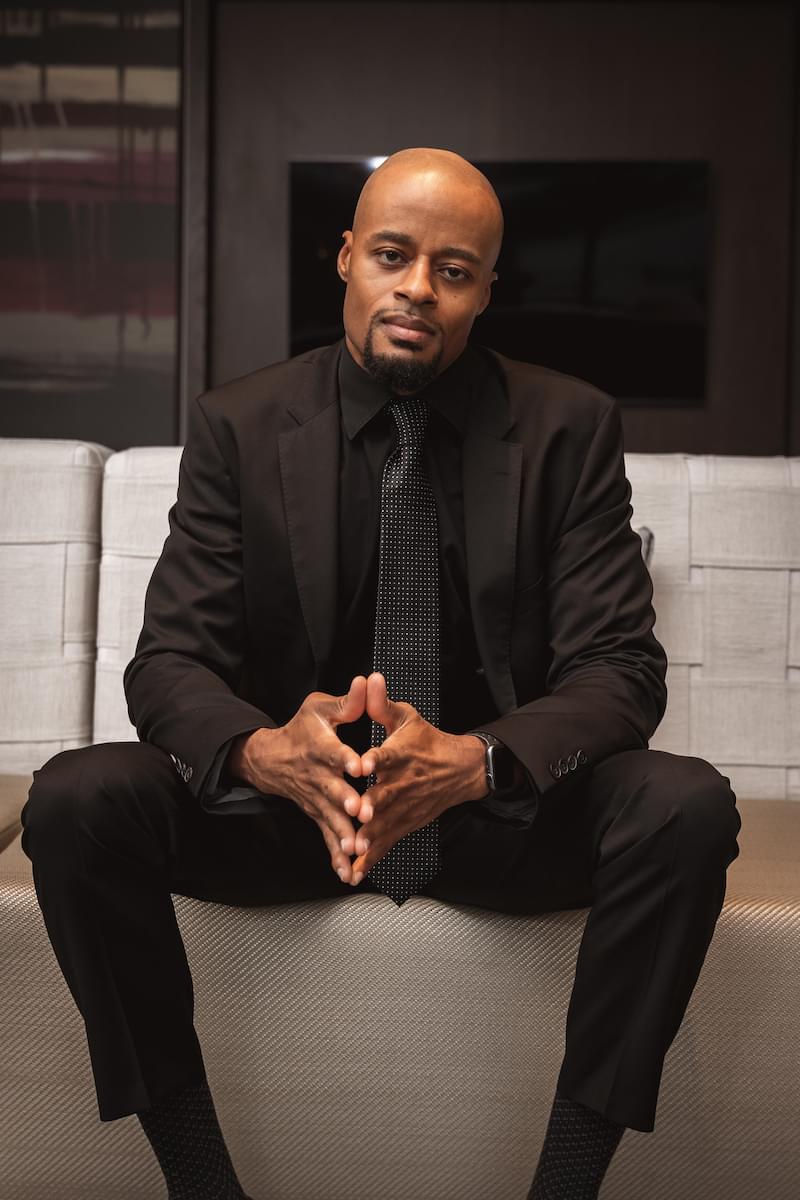 What do they do?

Why does Work On Your Game exist?

The entire Work On Your Game brand was born from Dre's professional athlete days.
Upon finding out about his background (started playing at age 14, one year of high school ball, walked on at a D3 college – then 9 years asa. professional), players started asking Dre about the mindset that allowed him to make it happen.
When sharing the answers in his "Weekly Motivation" videos (every Monday on YouTube for 400 straight weeks), people who weren't athletes started finding Dre's message and told him that it resonated with them.
The purpose of Work On Your Game is to give people REAL, honest, direct and objective perspectives on subjects that they deal with in their every day lives, starting from the inside-out.

What are they looking for?

Work On Your Game is a DAILY show!
No holidays. No vacations. No "encore episode replays".  No cheap 5-minute "quickies."
It's a full show by Dre, every. Single. Day. 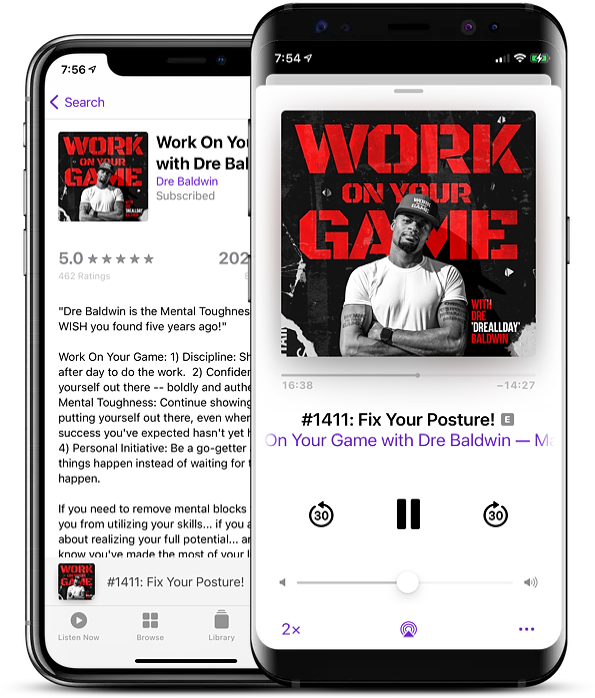 Get your products known to the "Work On Your Game" audience
The Numbers: how many people are listening?

*Each individual episode averages 2,500 listens in the first 90 days of publication.

– Your logo on show artwork

– Your ad(s) will run in ALL episodes during the period
– Cost estimates are based on 2,500 listens over first 90 days of publication
– 50% of estimate paid up-front; balance is paid based on actual listener numbers
– Ads will stay on every sponsored episode even after sponsorship ends
60 second pre-roll [1 available slot per episode]: $30 per 1,000 listeners / $75 per episode (estimate) / $6,750 commitment 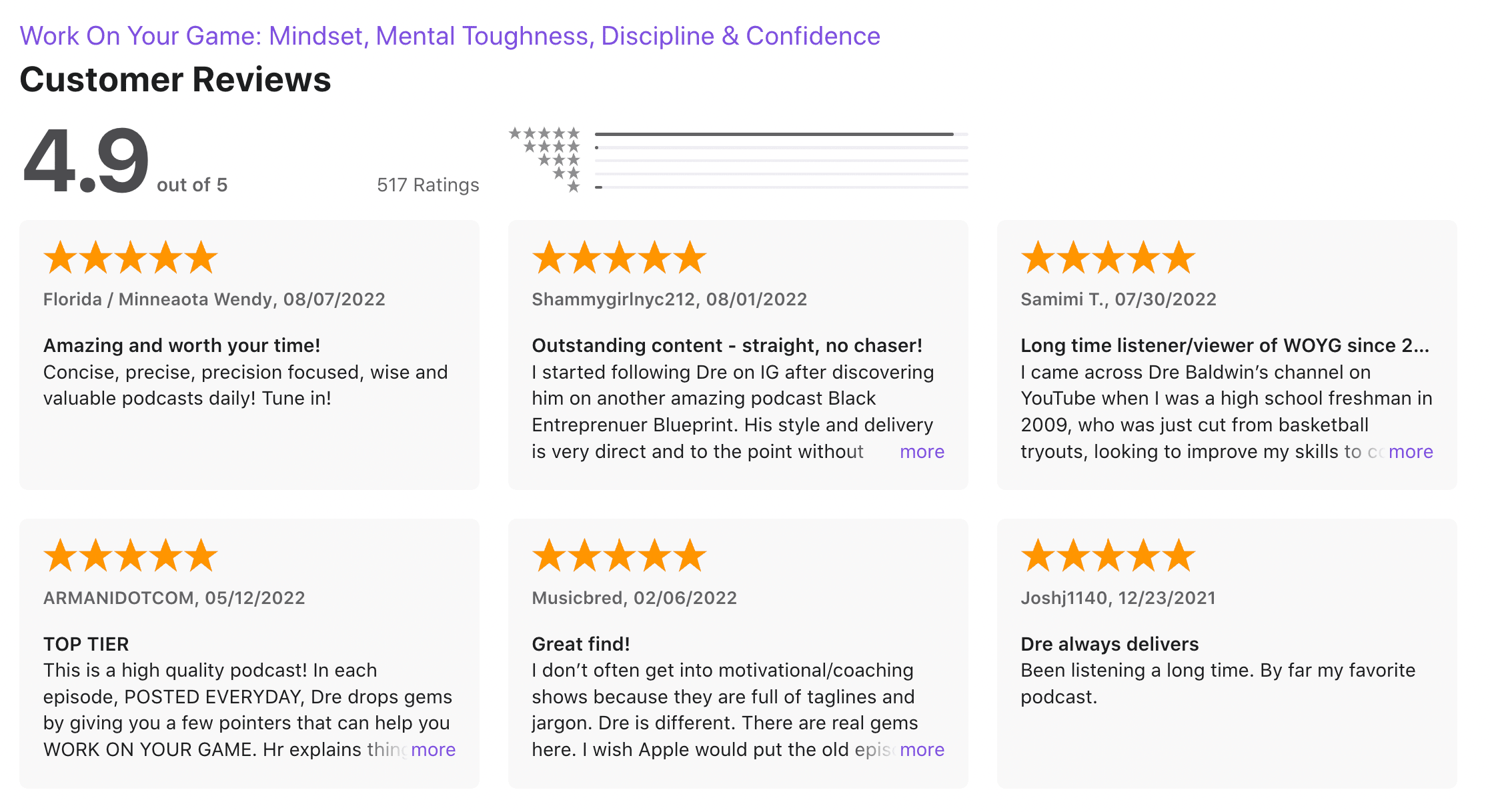 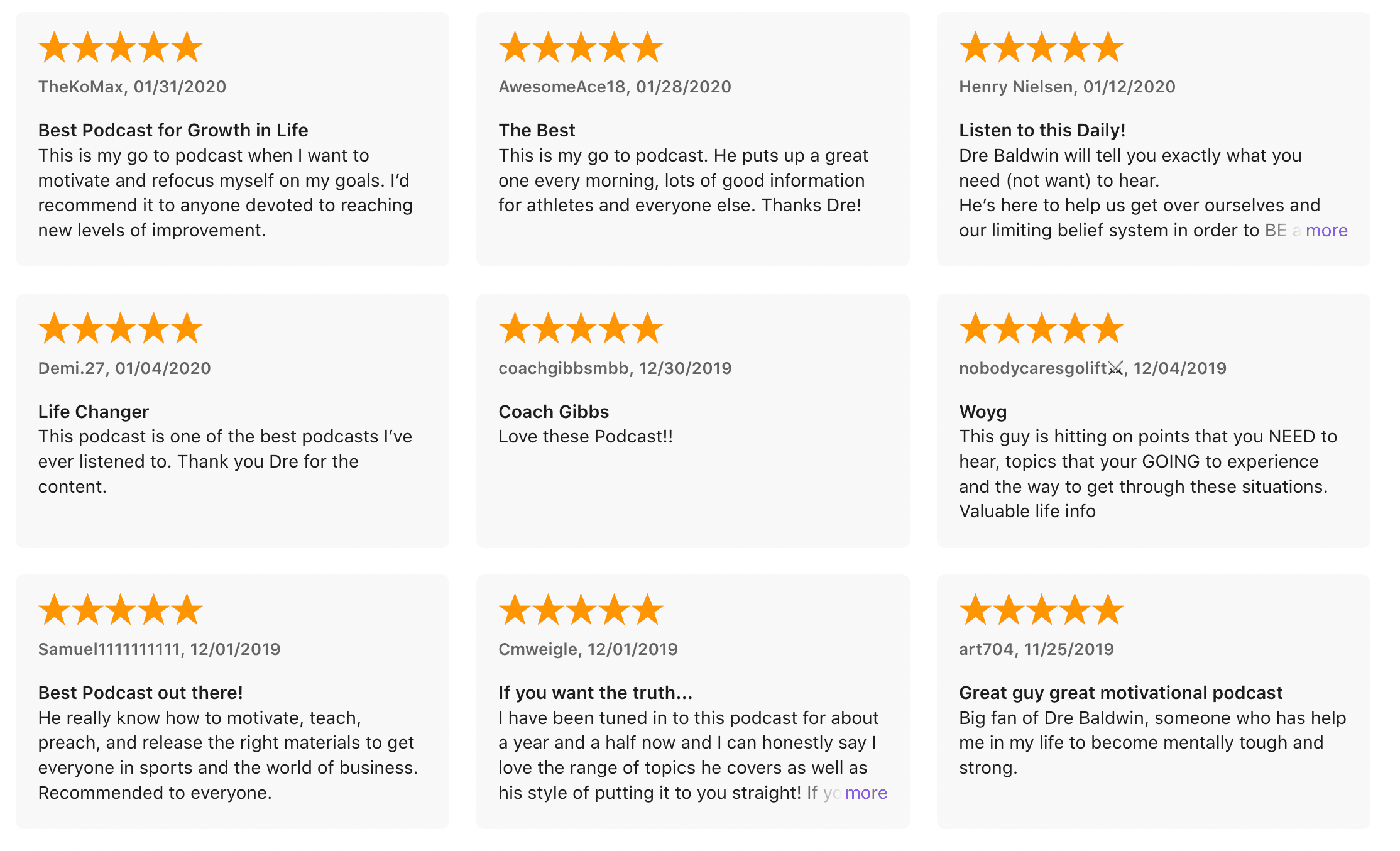 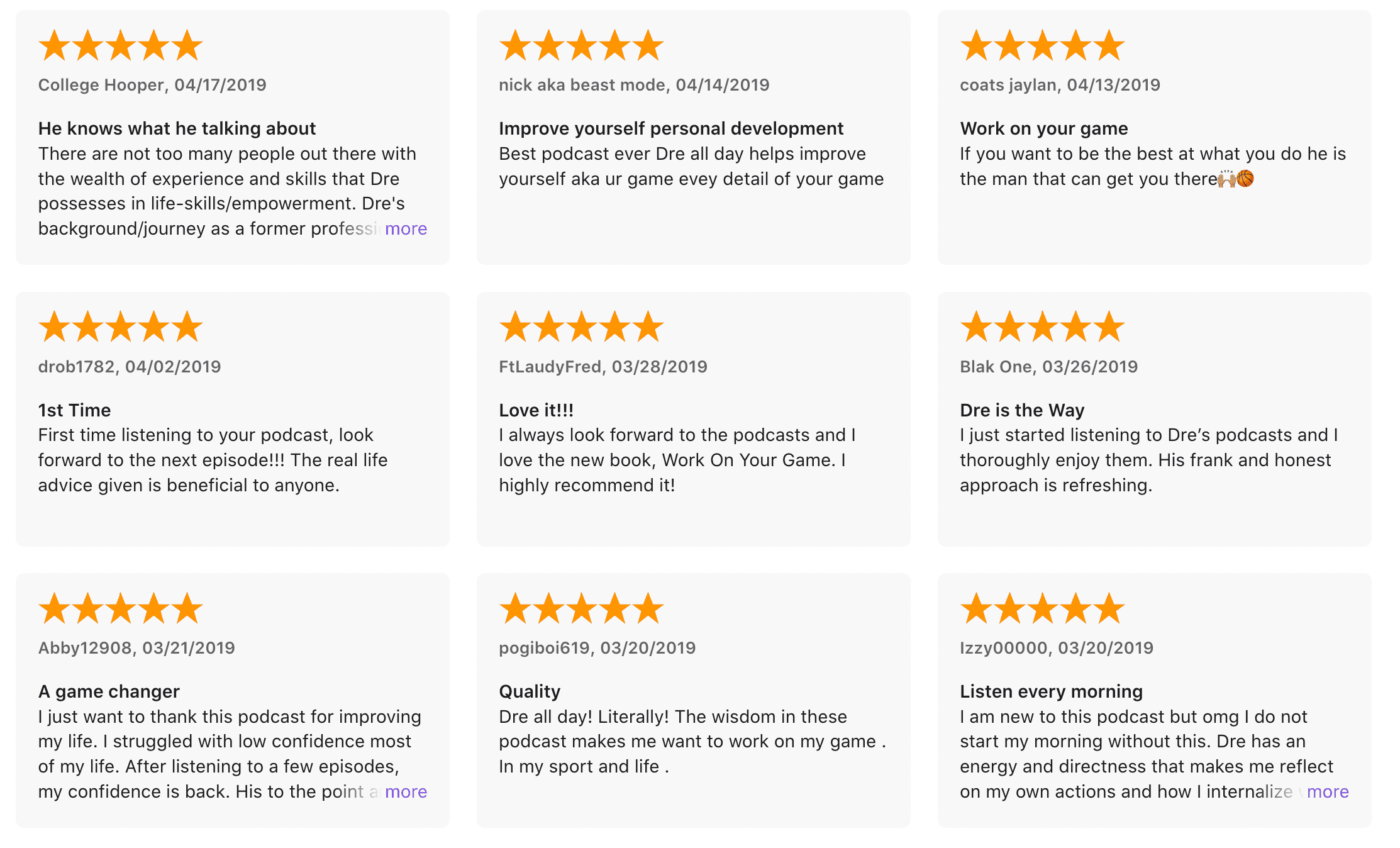 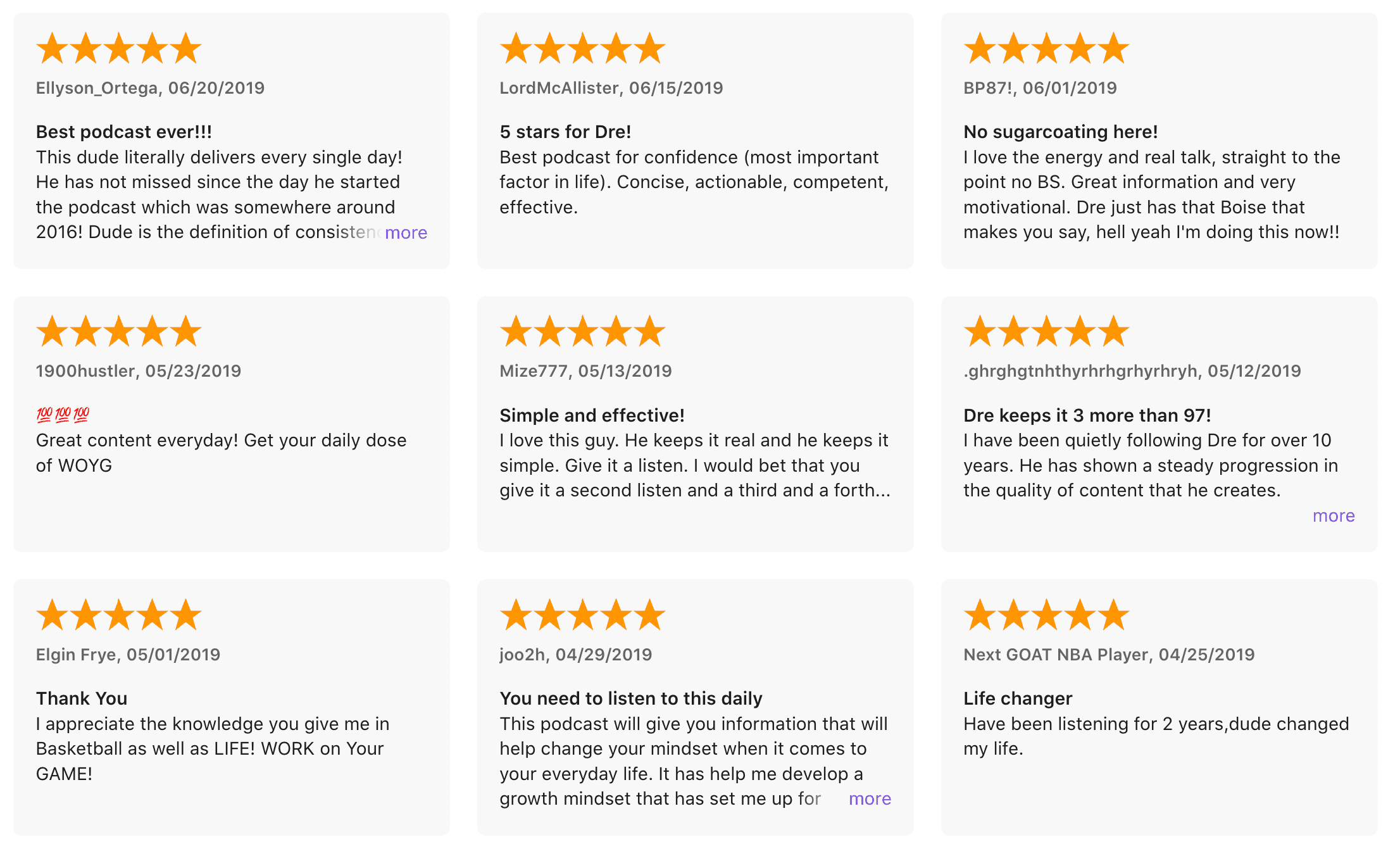 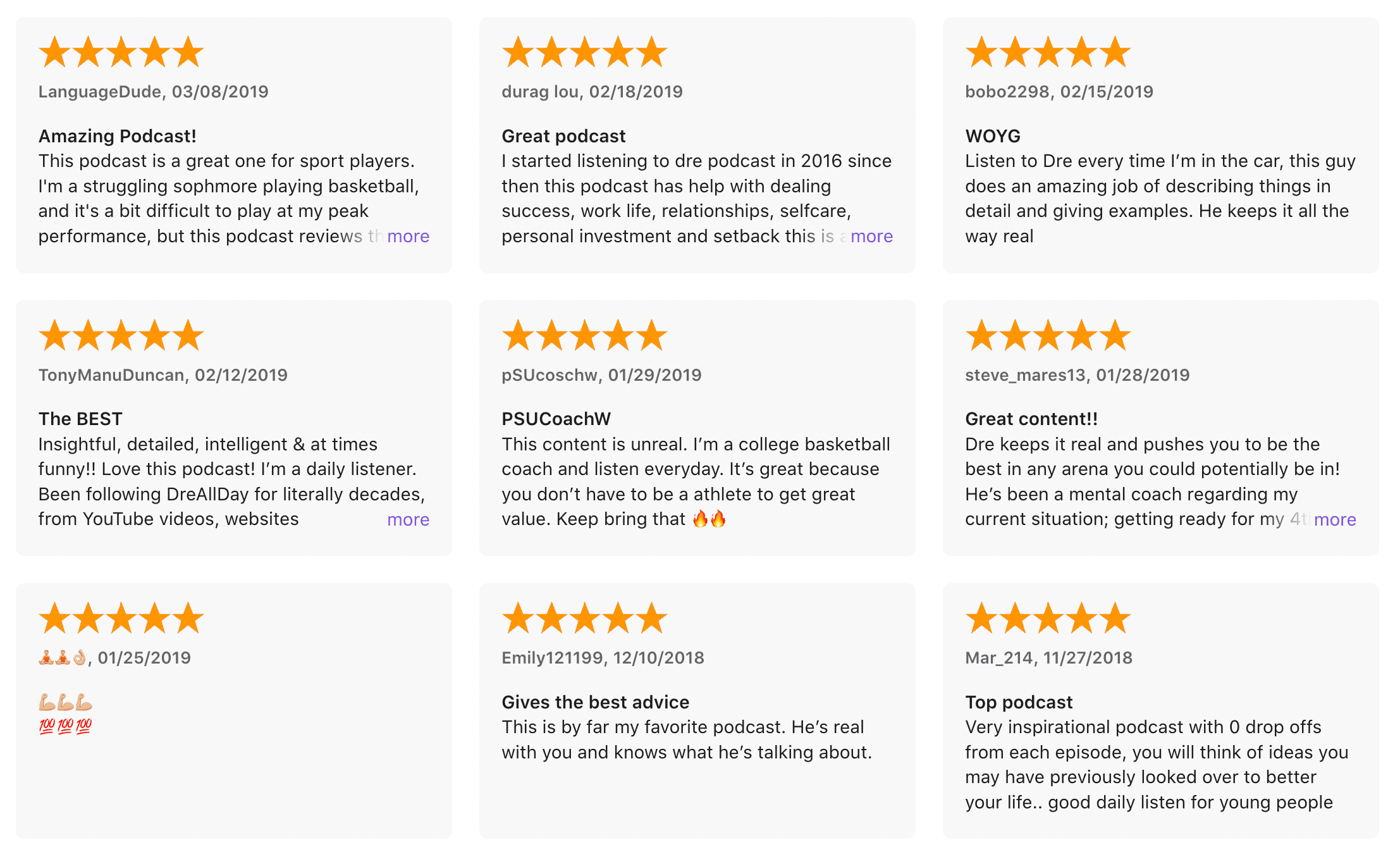 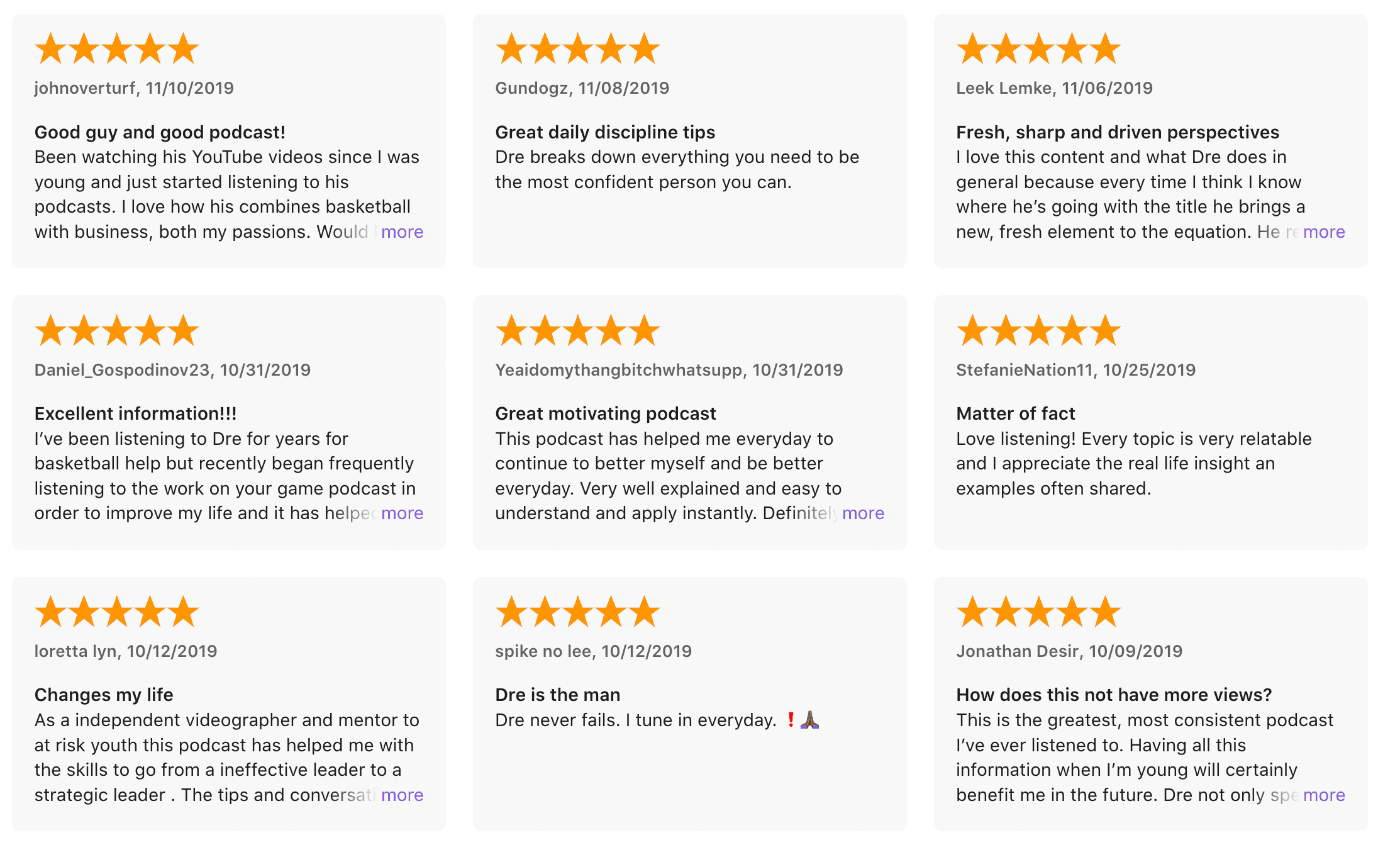 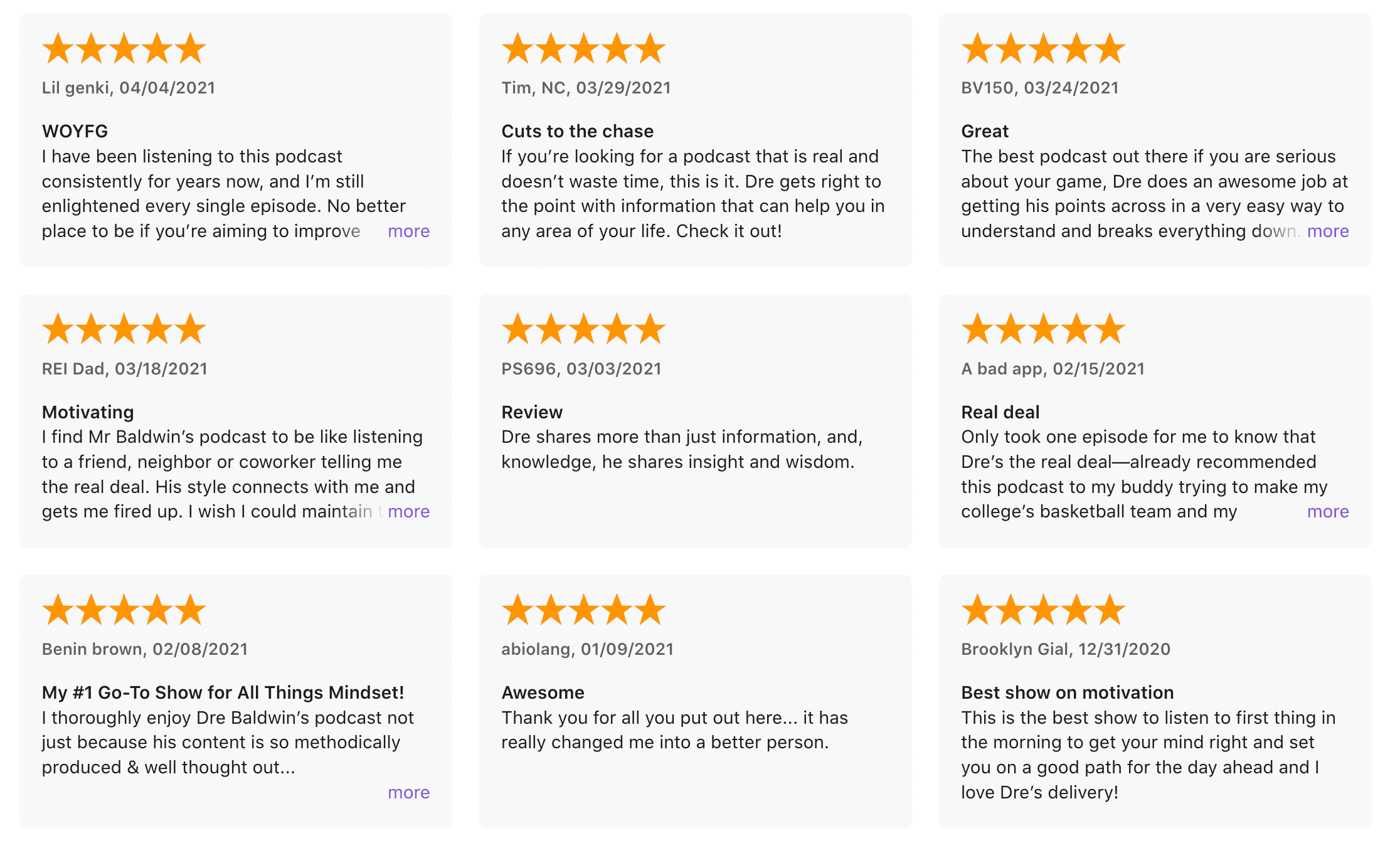 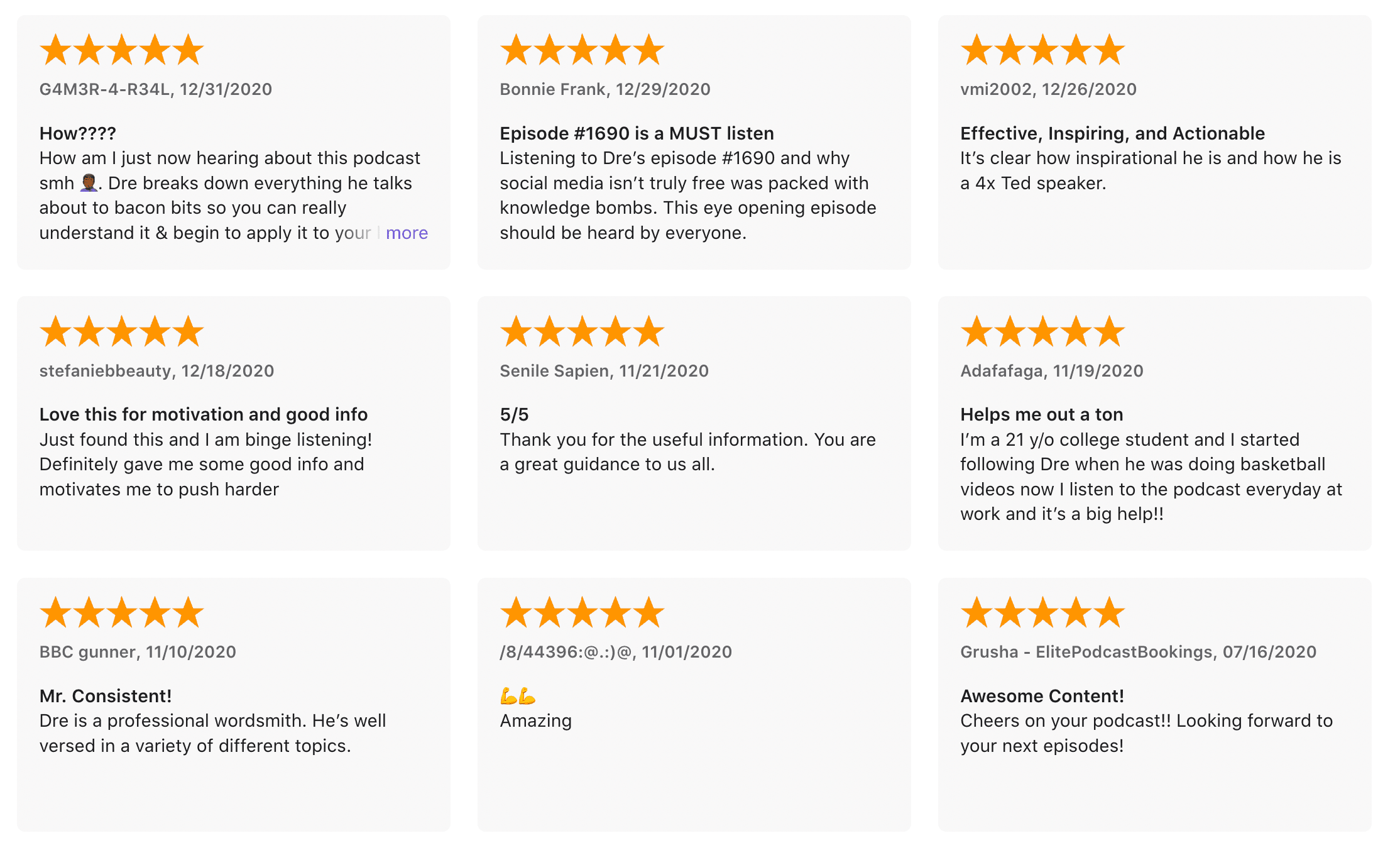 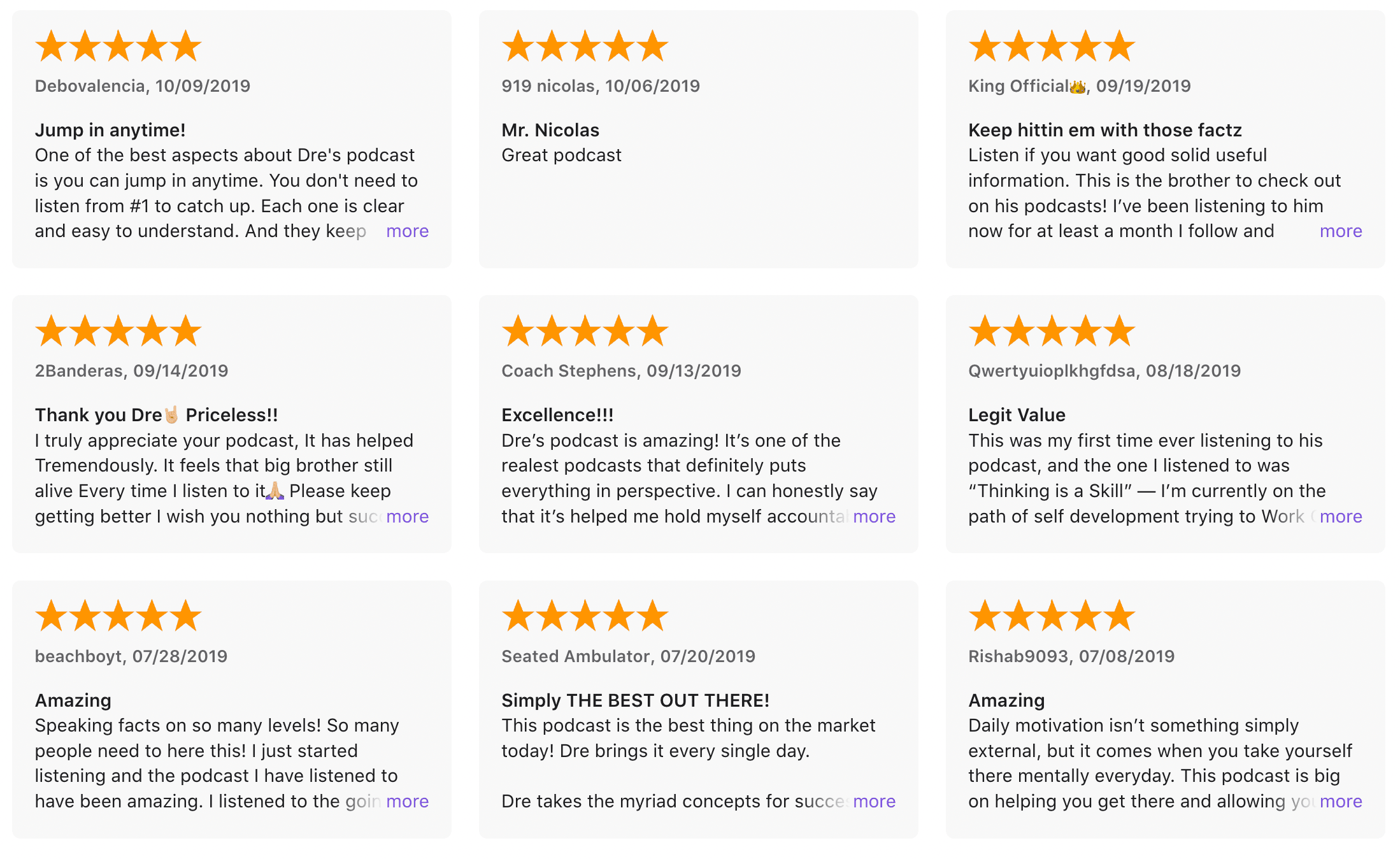 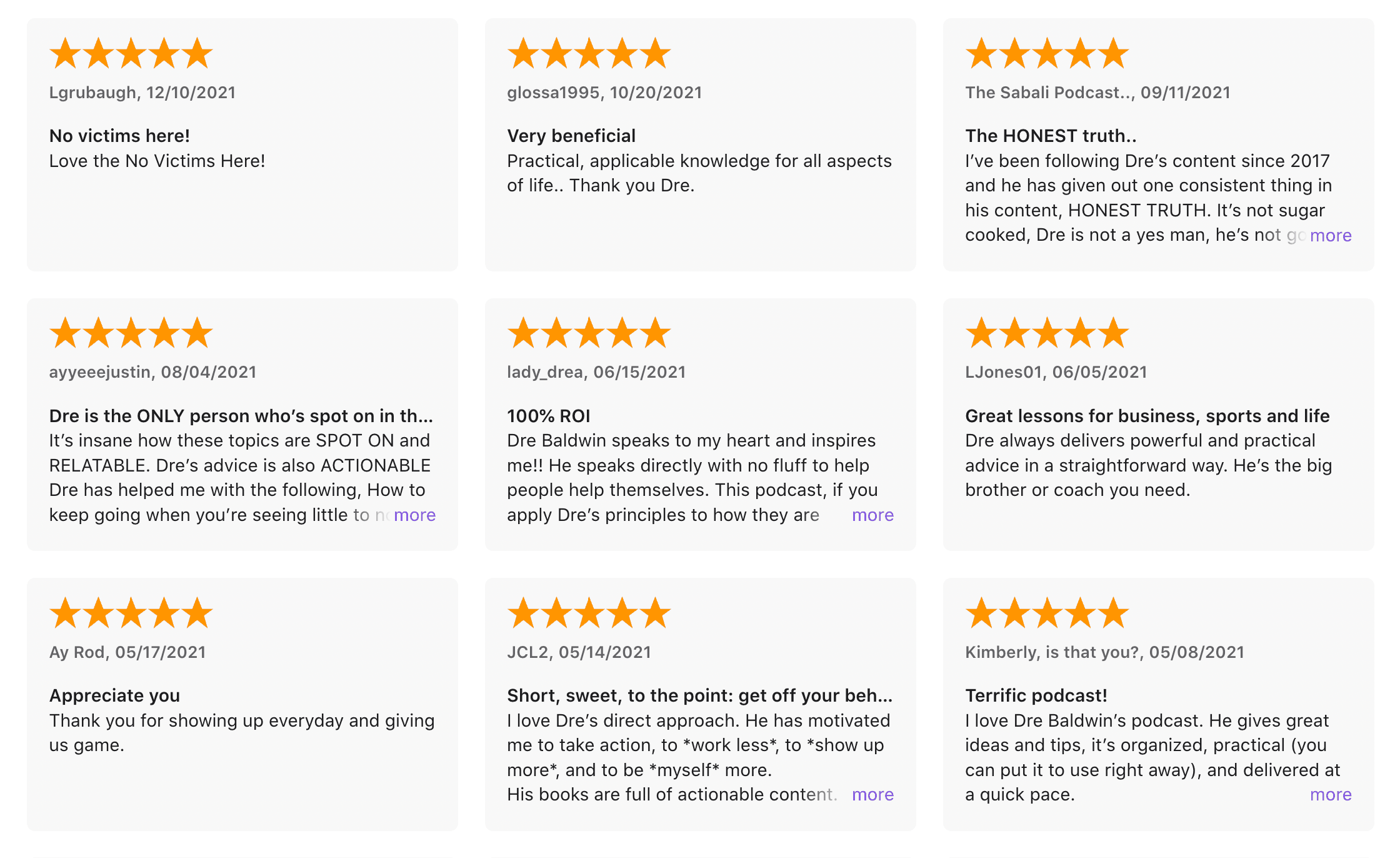 Honest TRUTH
I've been following Dre's content since 2017 and he has given out one consistent thing in his content, HONEST TRUTH. It's not sugar cooked, Dre is not a yes man, he's not going to tell you what you want to hear, he's going to tell you what you NEED to hear. You may not agree with it, you may not even like it, but you will hear the truth from Dre in all of his content. It's really up to you on how you decide to consume the truth. #WorkOnYourGame..
- Sabali

Great Find!
I don't often get into motivational/ coaching shows because they are full of taglines and jargon. Dre is different. There are real gems here.
- MusicBred
Cuts to the chase
If you’re looking for a podcast that is real and doesn’t waste time, this is it. Dre gets right to the point with information that can help you in any area of your life. Check it out!
- Tim

Gets Directly To The Root Of The Issue & Gives Crystal Clear Instructions
His podcasts get directly to the root of the issue & gives crystal clear instructions for how to improve ANY situation or tackle ANY obstacle!!! His approach is extremely straight forward and spoken in a way anyone can understand!!!
- Wife of a Snorer
When In Doubt Dre All Day
I am so grateful to have stumbled upon this podcast! Dre is completely relatable and gives practical tools for living. He is well read and delivers his material in an honest but firm manner. Dre is like the tough but loving coach you dream of having as an athlete. Whatever your pursuits are in life, Dre will help you stay focused and reaching for more in yourself.Highly recommended.
- Darbinski
Legit Value
"This was my first time ever listening to his podcast, and the one I listened to was “Thinking is a Skill” — I’m currently on the path of self development trying to Work On My Game & I came across his podcast. Let me just say, I will be a new subscriber, I will be tuning in daily and I will be listening to older podcasts that he’s produced. He brings a different spice to the self development world."
The Best Motivational Speaker ALIVE
"Dre Baldwin has a special talent when it comes to motivational speeches or in any speech. He will give u the confidence and mental strength u need to become the person u want to become. It worked for me and I’m sure it would work for u. WORK ON YOUR GAME"
This content is unreal
"This content is unreal. I’m a college basketball coach and listen everyday. It’s great because you don’t have to be a athlete to get great value. Keep bring that 🔥🔥"
I’m A Poker Player And Your Stuff Has Helped My Game A Lot!
Wanted to thank you for being you! I’m a poker player and your stuff, podcast mostly, has helped my game a lot! Work on your game, Dre all day!Friday’s episode, 1150, is perfect timing. I’m in the World Series of Poker Main Event and I did very very well on the first day.... At the end of the tournament, if I can look in the mirror and say I played each hand the very best I could then I didn’t lose. Dre all day.
- Chad Mize, Professional Poker Player
The BEST
Insightful, detailed, intelligent & at times funny!! Love this podcast! I’m a daily listener. Been following DreAllDay for literally decades, from YouTube videos, websites (WorkOYourGame.com), books, you name it. Probably his Number One fan!!
The podcast lit the fire
I've been listening to Dre, Work on your game podcast, for almost a month. I'd seen him on the whatever it takes network but it was the podcast that lit the fire.... I've just recently started to get my fitness in check and thought it was time to get my career and finances sorted. I've always known what I've wanted to do and had a small amount of success but then retreated and procrastinated. Now at 38, almost 39, it's time to get serious. Dre's podcast was the spark I needed, talked about Inner game, getting the mind right... something just clicked. I can't recommend it enough... Thanks for the great work Dre.
- Colin
Always relatable to the average individual……. GREAT MOTIVATOR, GREAT MAN!!!
I was listening today to one of his podcasts about “You Don’t Have To Prove S*** To Anyone” and I though at that very moment he was a preacher but, I know in my life their are times where people can diminish your goals and apirations as well your VALUE. But, Dre Baldwin gives a 110% sermon on not allowing yourself to be suckered into that type mentality and I agree with him.. Very wise man with a lot to offer and I’ve already subscribed to his youtube channel as well but with his podcasts you get an intimate feel and the topics are always relatable to the average individual……. GREAT MOTIVATOR , GREAT MAN !!!!!!
- UnspOWken Assassin
get DAILY exposure to 2,000,000 people: contact us now
Subscribe to get every new episode of the daily MasterClass sent straight to your phone: